Continuing on with my short piece, The Appointment, because I am too lazy to think of another blog topic and also because I like stories and wanted to see where this writing prompt would go.

All credit to: Urban Circus.

Although feeling a little adolescent, Miranda silently chanted her mantra as she stepped onto the train: ‘You’re okay’. She’d had a few mantras over the past three years since “that awful business”, as her mother had put it. Kathleen O’Sullivan had only censured her daughter once but her bewildered expression stung more than any curt retort. Her father hadn’t said a word, but the look on his face spoke volumes – tomes. He’d already had his piece when she’d moved out and in with Jimmy: “’Shacked up’ with more like! You’re a fool, my girl, if you can’t see the real Jimmy…the man beneath that smooth front.”  Patrick O’Sullivan was proud of his only child. She was the first, the only, member of his family to go to university, but somehow that made the shock of her decision to live with Jimmy worse. It was 1963 and not yet commonplace to live in sin, at least not for good Irish Catholic families newly arrived on these vagabond shores.

Jimmy was everything that her father wasn’t. At times (not often, for she’d tried to expel him from her mind during the past two years), she’d wondered if that had been the attraction. Where Patrick O’Sullivan was dour and economic with his words – joking rarely and only in a grim, scathing fashion – James Nelson was warm and loquacious. Charming. There was no avoiding the fact that Jimmy was charismatic, despite the pain it cost Miranda to acknowledge it. He laughed a lot and had a way of looking into her face with a peering intensity that made her feel as though she were fascinating. No one before or since had ever made her feel that special.

Her mother was less critical and inclined to hope that Jimmy would do the right thing. She hinted about an engagement and Miranda’s heart ached that she couldn’t produce one just to satisfy her mother’s dogged sense of convention. She herself didn’t mind, so heady was her adulation of Jimmy. “Mum, I don’t care about the ring…it isn’t important. He loves me!”

Miranda blushed to think of it now. Enough! She swept the rogue thoughts from her head and opened her briefcase, withdrawing the contract and smoothing it over her knees. Is this skirt too short? She’d been a bit daring but then it was an informal kind of affair. Affair…what a faux par – a Freudian slip! It was an interview, an appointment, that was all. Miranda couldn’t work out which was the more daunting word for her meeting. She felt a bit like a schoolgirl, not a junior partner at Bradley, Stein and Parker.

Her heart began to pump at an eager staccato pace and to deflect her nerves, she at once began scanning the document. She knew just how much reading she could accomplish on the forty minute commute.

All credit to: My Darling Darlinghurst.

On writing.  Apparently adverbs are the enemy. Experts of a high calibre have warned writers and would-be writers (who are writers anyway as they write), to avoid using adverbs because they’re clumsy and bad writing. My friend Pinky is working on a novel and she’s been advised not to go down the adverb-path-of-ruination, however, I am sceptical. J.K. Rowling got away with an abundance (but then she was J.K. Rowling) yet Stephen King hates them. Jane Austen rarely used them but ‘Adverb’ was Charles Dickens’ middle name. That probably gives us modern scribblers carte-blanche. 🙂

I’ve only included ONE adverb in the above little piece and feel very virtuous. But before I become overly pompous, I’ve used twenty four adjectives! 😦

Food Selfie. I frequent a lot of cafes because I am a decadent and self-confessed cafe whore. Also, it’s easier to meet friends in cafes rather than subject them to my inferior coffee and cake. I recently blamed Poppet for taking ‘food selfies’ and posting them on Instagram but if I’m honest, snapping pics of nice food is a teensy bit addictive.

I simply had to take a photo of this when I caught up with some friends in the school holidays (that was 2 weeks ago, but we all know I’m a bit slow with posts). This gastronomical experience was a first for me – a Scone in a Pot. Bizarre. A purist would be appalled as I don’t think it’s etiquette to dig scones out of earthenware pots. 🙂 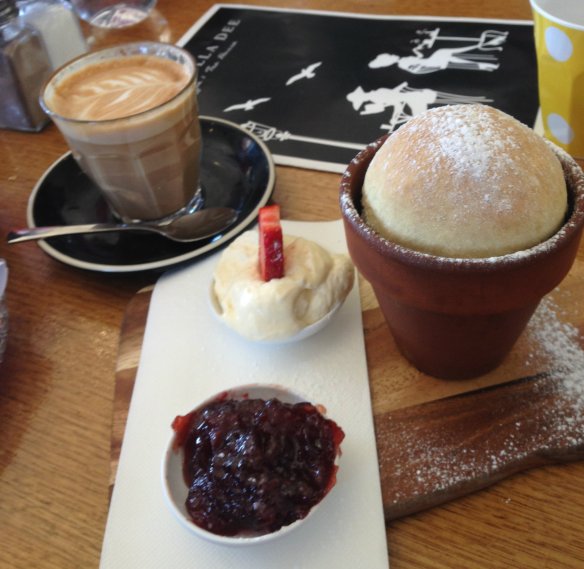 Enough about me, what do you think? 🙂

I’ll leave you with a meme my Pinterest  expert sent me. It highlights the perils of online dating superbly (another adverb – why oh why are they so bad?)

Next time, I am moving out of my comfort zone with a post entitled ‘My Friendly Stalker’, on flirting – a true story. However, on reflection, I may not as it shows my character in a very poor light…

Linking up today with Jess and IBOT because, well, it’s Tuesday. Joining Grace’s FYBF  for her bevy of blogging brilliancy. 🙂

40 thoughts on “A little story (and some regulation trivia).”

I'd love to hear your thoughts. Cancel reply